My journey to Marin Lutheran Church began years ago in the Midwest, South Bend, Indiana, to be exact.   I was born there, and moved progressively eastward with my parents, brother and two sisters.  After graduating from high school in the Pittsburgh, PA area I attended college at West Virginia Wesleyan.  Finishing with a degree in Religion and Business I went on to Yale University where I received a Masters in Divinity.  While in New Haven, CT I met Kathryn Gulbranson who was also studying to be a Lutheran Pastor.

After Yale, Kathryn and I did internship years.  We were married in the summer of 1988 and began serving congregations in February of 1990.  We both served three congregations in the Camden, New Jersey area.  From there Kathryn took a call to St. Paul’s in Teaneck and I served St. Matthew’s in Jersey City—both communities in Northern New Jersey.  In 2000 we were called as associate pastors to St. John’s in Sacramento, CA,  in June of 2005 we began serving Marin Lutheran Church and in December of 2016 I became sole pastor here.

Kathryn and I have three wonderful children: Hannah, Kristian and Nikolas.  Hannah is a college graduate beginning a career and Kris & Nik are in college. 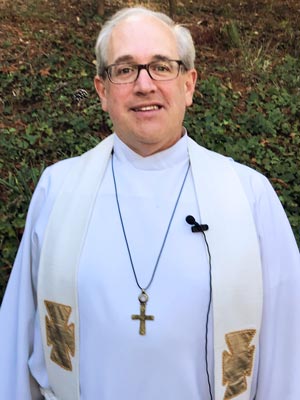